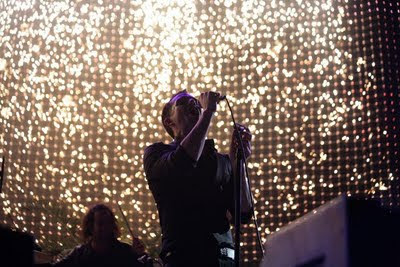 To celebrate 50 Years of MINI, miniusa.com is taking a glimpse into the future of personal travel. Users can submit renderings of what the next 50 years of transportation could look like. I'm totally diggin' on these two concepts of personal commuter flyers. I love seeing rims on this flying mini-pod and it's pretty rad to see a fully rendered sky-cycle straight outta some anime flick. 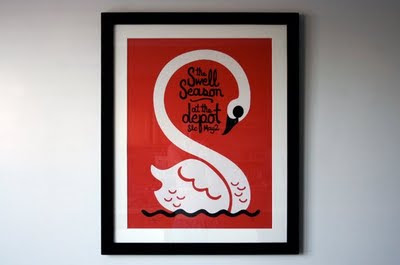 We finally framed and hung our killer Swell Season screen print poster that we scored from the wonderful Signed & Numbered for last year's show at The Depot. We love looking at this thing in our dining room. For those of you who are unsure of who the Swell Season actually are, they're basically the dood and chick from the hit indy flick Once. Here's a little refresher from none other than Upto12.
Posted by kyality at 8:14 AM 2 comments:

Even Magnum is Jealous


Shell has compiled a commercial of seriously fabulous Ferrari footage that'll even wipe the mustache off T. Selleck's mug. Enjoy!
Posted by kyality at 8:46 PM 1 comment:

I Am The Bicycle Thief 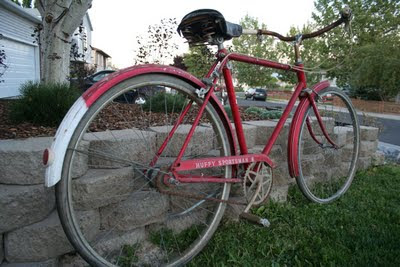 So three weeks ago, while on our weekly Sunday family walk, I saw this sweet knock-off of a classic Schwinn Collegiate called a Huffy Sportsman. It was sitting precariously against some old furniture in front of a neighbor’s house. Now this stuff was not that close to the curb, but it kinda sorta looked like it might be headed there so I full-on swiped the bike.

Once I was home for a bit, the guilt kicked in and I went back and left a note on the neighbor’s door. I let ‘em know that if they weren’t planning to toss the thing, I’d be happy to bring it back. Well it’s been three weeks—I think I’m home free. My goal is to get it ride-able, perhaps with a little help from this guy. 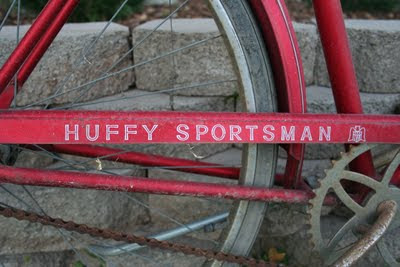 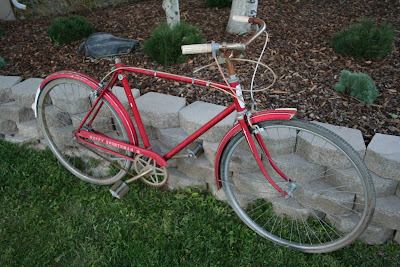 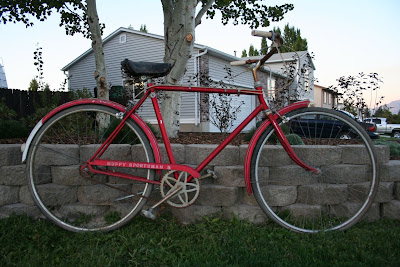 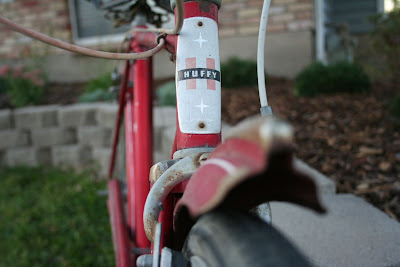 I'm totally inspired by this collection of sweet little paintings of stylish, yet modest, mid-century modern homes by artist Leah Giberson. I love the detail, especially in the landscaping. Would be a pretty cool neighborhood to live in, don't you think? 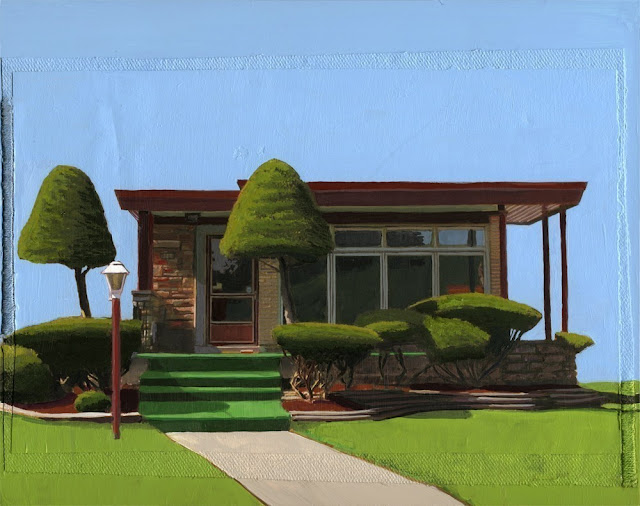 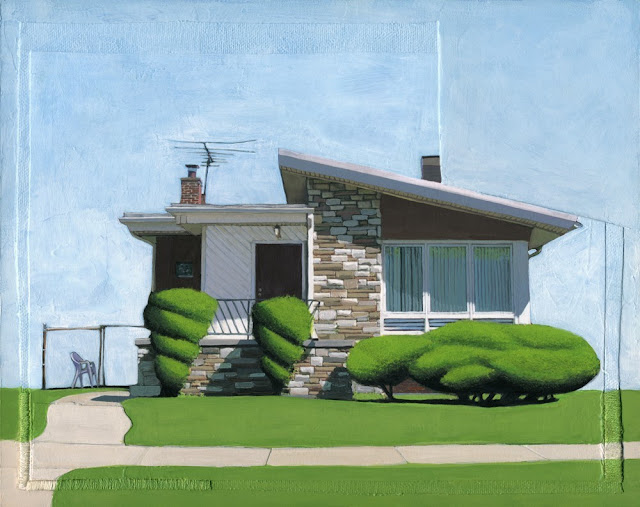 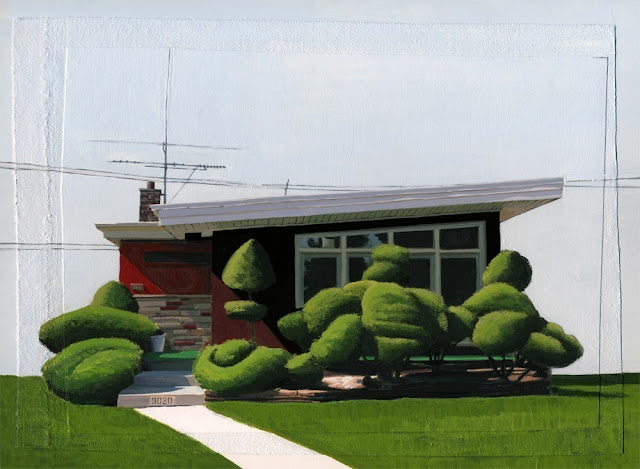 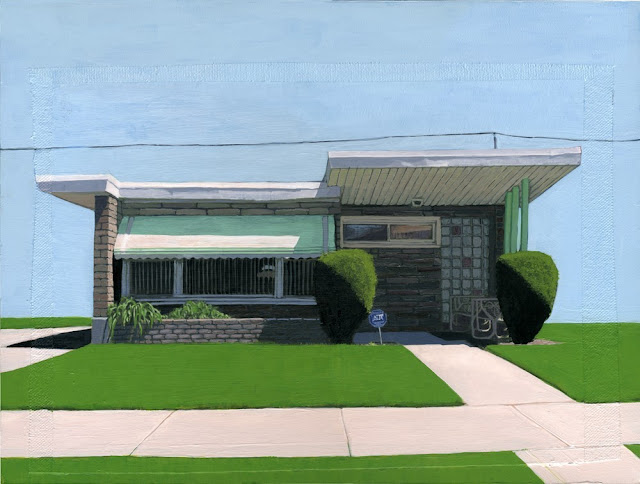 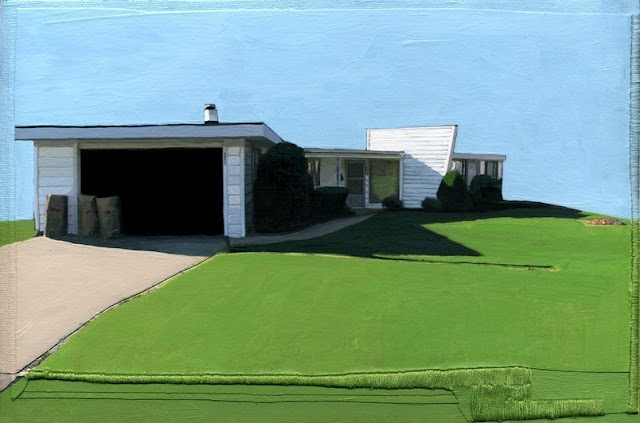 So, I took the liberty of creating a custom wallpaper of these paintings. It's optimized for a 15-in Macbook Pro, but there's plenty of resolution for a larger screen as well. I set the artist's URL in a mid-century modern typeface namely, House Industries' Neutraface, crafted after architect Richard Neutra's own architectural font. You can download the wallpaper by clicking here or on the picture below: 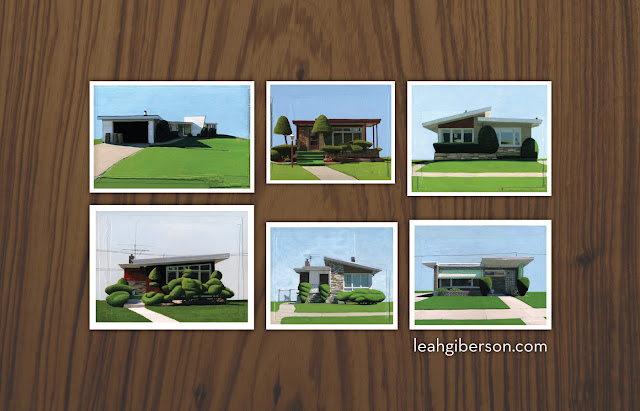 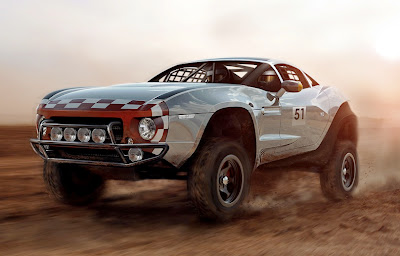 Threadless.com's No More Nudes biz model of user-submitted tee designs and community-voted production has interestingly enough been more or less replicated within the fledgling private auto industry. Local Motors is a new site/auto manufacturer that collects industrial designers' user-submitted concept cars and then actually produces the car that the community has voted on.

Apparently the first winner to be produced will be the concept depicted above designer by Sangho Kim called: The Rally Fighter. The car will sport a BMW 335d 3.0 Liter, Turbo-diesel Inline 6-Cylinder Engine. To get in line a spot will cost you $99 and if you order to you'll be 23rd in line. Then you'll need to fork over another $5K to lock in your order. Who knows how much the final Rally Fighter will even cost—but if you're passionate about car design and user-submitted content—this might be the ride for you.


Check out this fun b-day music vid! How do you picked to be in this thing? Sheesh.