For those of you that haven’t heard, the greater SLC area has been pounded this winter with snowstorm after snowstorm. Luckily for me and my MINI’s Pirelli runflat performance tires, a majority of those storms have hit on the weekends when I didn’t have to necessarily drive the MINI and could get away with rolling in our other mini (van, that is). After half a winter of winning Russian Roulette, I felt it was time to stop taking chances and get some moon boots for the rod. 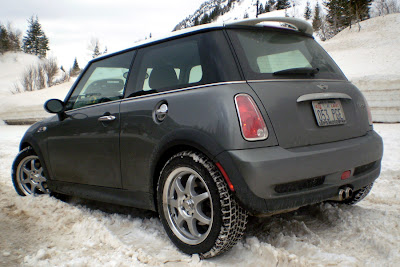 Since it’s already halfway through the season, I was able to score a deal on a solid set of slosh-eating Bridgestone Blizzaks. I was hoping to apply a more rugged look with a simple pair of black steel rims, but apparently there’s a "nationwide shortage". So, I chose the cheapest pair of alloys I could find—MB Seven X’s. And I have to admit, I’m pretty stoked on the results. ("Nationwide shortage", I'm such a sucker!) 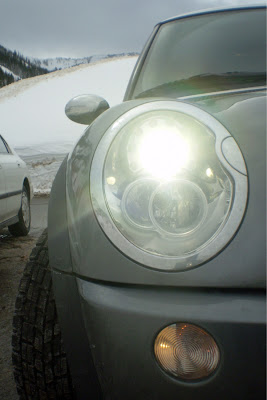 I’m blown away by the grip on these bad boys. In the snow, the thing’s a tank—yet there’s minimal impact on daily performance. Granted I can’t take the curves like usual, but I suppose that gives me something to look forward to this spring. In the meantime, I’m sure I’ll enjoy both the added cold-weather control and peace of mind that this little MINIzilla now has to offer. These pics were snapped up at Snowbird at Struck’s Annual Manager’s Meeting this morning. Enjoy!

Outstanding shot of the hindquarters! That S looks as good as the day it left the dealer for a better home.

Well, on Wednesday we had the first major snow storm since I got snowshoes for the S. It also happened to be the biggest storm of the year. Took 2.5 hours to get home, but that was just due to the other cars. They were slippin' and slidin' in the foot of snow in the middle of the road. But I cut through it like a hot knife in butter. I win!