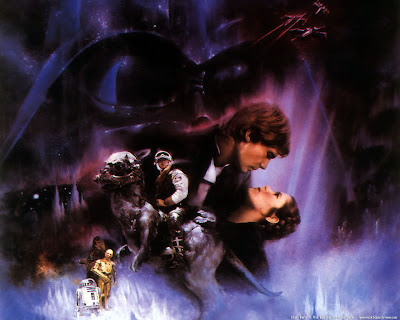 There are certain moments in life when most dads are ultra proud of their sons. You know, like when he slides into home plate or something like that. Well, that moment happened to me this week in my own Kyality-sort-of-way. Mrs. Kyality randomly asked Kyality Kid No. 2, let’s call him Pants, what was his favorite Star Wars movie. Fully expecting Pants, who is not even 4 years old yet, to say something lame like Episode I or the Clone Wars cartoons—he instantly replied: “Enstrybacks.”

When I got home from work she told me to ask Pants the same question. The answer again came immediately: “Entstrybacks. You know, the one with the snow bear.” A father couldn’t have been more proud. Apparently my very discerning 3- almost 4-year-old is able to catch the drama, the nuance and the wit of The Empire Strikes Back! Amazing! Granted he hasn’t yet seen Episodes II or III to taint his vision. But at the same time he hasn’t been tempted by the likes of Jar Jar Binks or the Ewoks, because as Hurley says, "Face it, Ewoks suck, dude."

I was 4 when Empire was in theaters—I remember seeing it with my dad, Normality. And at that time it was my favorite movie too and here’s the proof: 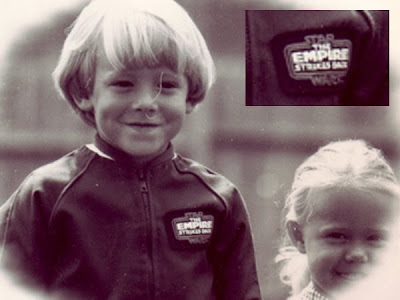 That’s a 6-year-old Kyality and yes, that’s a young JessInTheCity. But then Return of the Jedi came out just as I turned 7 and it took me until high school to realize what everyone knows: Enstrybacks IS without a doubt the best Star Wars flick. Well done, my son. Well done.

I introduced our little guy (17 months) to Star Wars for the first time last weekend, and started with Empire. He's a bit too young to espouse his love for it - and nothing tops Cars in his little world - but he was into it the whole time.

Though I have to say I think ROTJ gets a bad rap. Yeah, the Ewoks suck, but in my opinion the speeder bikes, space battle and attack on Death Star II, and the EPIC throne room battle more than compensate.

In fact, I'm still pissed at how bad the prequels botched everything. I wanted Anakin standing at Palpatine's side, watching him lightning Padme and doing nothing, which would have lent so much more weight to his acting to save Luke (and gone a long way toward redeeming the prequels). Alas...

Oh man. I've had a good/funny revisit with ROTJ recently as well. Check it out: http://kyality.blogspot.com/2008/09/get-your-jedi-on.html